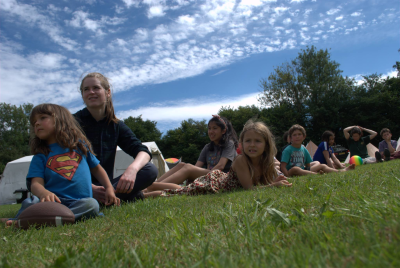 Hello, and welcome to the Ealing Woodcraft Folk website. The Woodcraft folk is an educational movement for children and young people, with the aim of building a world based on friendship, equality, peace and democracy.

The folk was established in 1925 as an educational movement and charity, it was originally founded as an alternative to scouts and run by young people. Our groups meet weekly, and enjoy activities like playing games, drama, discussion, crafts, singing and dancing. During the summer months we also go camping or hostelling at weekends, with a longer camp during the summer holidays.

Our group nights usually last between 1 and 2 hours, and we divide our groups up according to age:

Three to five year olds are known as Woodchips

Six to nine year olds are known as Elfins

Ten to twelve year olds are known as Pioneers

Thirteen to fifteen year olds are known as Venturers

Older teenagers (upto 21 officially) are known as District Fellows (DF's), and are expected to arrange their own activities, or help run other groups.

You can find more infomation about the woodcraft folk on our National Website.

The Woodcraft Folk in Ealing

Our groups in Ealing are run in the evening during term time, currently they are run by a mixture of parents, DFs and previous members.

On Monday evenings in Hanwell we have elfin, pioneer and venturer groups.

On Wednesday evenings in White City we have elfin and pioneer groups.

On Friday evenings in South Ealing we have elfin and pioneer groups.

We also have an active DF group that usually meets on mondays. For more infomation about our groups contact Monika at monika@ealingwoodcraft.org.uk. You can also find  us on Facebook.